Today, the first peal on the new eight was rung.

Following the successful rehang and augmentation at Ixworth, weekly practices will resume from Tuesday 9 December. We will aim to practise with beginners between 7.15 and 8pm then others 8 till 9pm. Everyone welcome but please let us know if you are coming if you can! Contact: , 01359 251896 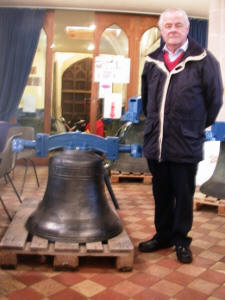 All the bells, including the two new trebles have now been re-hung in the tower and it has been an exciting few days with many local people popping in to see the progress being made. Year 4 of the local primary school have paid several visits and the children were thrilled to get up close to the bells and do some rubbings of the inscriptions, then later returned to the church where they saw one of the bells being hoisted back into the tower. We were also delighted to welcome Michael Sharpe, brother of Lenny, to whose memory the trebles are dedicated, back to the church to see the new bells and to remember his ringing days with Lenny, Ken Brown, Ernie Bishop, Harry King and others back in the 50's. The bell hangers will return in a week or so to fit sliders, pulleys and - we hope - ropes.

The Bells are Back! Thursday 6th November, 2008 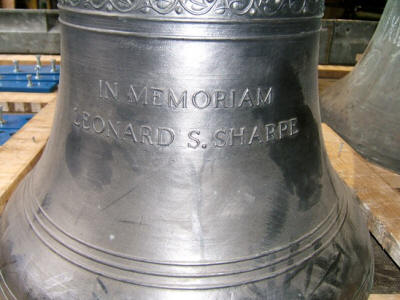 The old six and the the two new bells for Ixworth arrived back in the village yesterday. Local volunteers David Reeve and Mike Walker, assisted by Chris Nunn, John Taylor and others undertook the transportation of the bells from the works at Appleton, Oxfordshire. The two new trebles were cast thanks to a generous grant from the Suffolk Guild and dedicated to the memory of Lenny Sharpe, whose bequest to the Suffolk Guild made this possible. Work will start on Monday to hang the bells. Thanks go to everyone who has supported this project, which was also funded by a grant from the Heritage Lottery Fund. 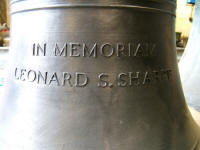 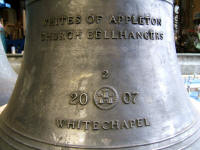 A gorgeous week of summer weather helped the team at Ixworth dismantle and lower their six bells out of the tower under the careful supervision of Chris Nunn and Alan Moult. Teamwork was paramount and each bell was carefully lowered and eventually lifted on to a trailer, ready to be transported to White’s works at Abingdon this week, courtesy of churchwarden, local farmer and bell ringer David Reeve. Quite a feat of ingenuity and a credit to all involved that everything went without a hitch. It’s over to White’s now until the autumn when all six refurbished bells will be back with two new trebles, recently cast at Whitechapel.