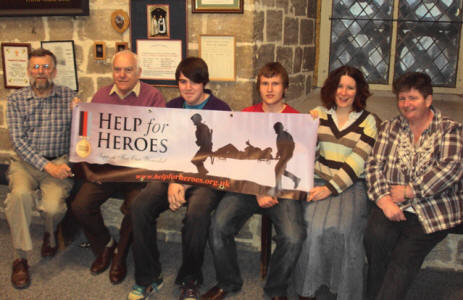 Every year, bell ringers of the North West District of the Suffolk Guild of Ringers get together to try and consolidate what they have learnt at their practices with a Quarter Peal Week. The aim is to ring a quarter peal at as many of our towers as possible. This includes all the towers in the Stowmarket, Thingoe, Ixworth, Mildenhall and Hartismere Deaneries.

This year, the Quarter peal week took place between 11 and 18 April and we invited all parishes to sponsor a quarter peal at their towers for the charity Help For Heroes. In our part of East Anglia, we have many close connections with the Services and as ringers, we wanted to do something to show that every village cares deeply about the lives scarred by current conflicts. Last year we rang 24 quarter peals this year we rang 32 quarters and as the Ringing Master has reported in her article, it involved many ringers from all over the district, and included some new conductors who have greatly enhanced their skills by calling several of the quarters. Many towers that don't have a regular Sunday Service band took part with the help of a band of roving ringers. Some of the towers would not have been the first choice of those seeking easy bells to ring. In some cases it was prudent to make sure the quarter peal started early enough for the lights not to be needed, as there were none!

The final amount of money collected via direct sponsorship and donations through our JustGiving page has now reached just over £1700. Our original target based on the number of quarters rung last year and allowing £20 of sponsorship per parish was £480, so we are delighted that our efforts have captured the hearts of some very generous donors. Apart from the obvious benefit of financial aid for the Help for Heroes Charity, we feel that the exercise has also been a useful PR tool. People who haven't really acknowledged the existence of their local bells, have been very interested to find out why the bells have been ringing. Sadly even before the quarter peal week took place, bells were rung half muffled for the funerals of three members of the Royal Anglian Regiment who were killed in action over the previous 3 months and this served as a poignant reminder of just how hard it is for the families who were grieving, but we hope the relatives were comforted by the bells being rung for their loved ones.

The whole week was very well supported by the local public and all the ringers took the Help for Heroes Cause on board and did their very best so Congratulations are due to everyone who took part.

As a direct result of the quarter peal week we have been spurred on by our efforts to continue supporting the Help for Heroes Charity.

The photograph shows just a few of the ringers who took part in the week, pictured just before another successful quarter. From L-R Lawrence Pizzey , Ian Holland, Alex Talow, Louis Suggett, Abby Antrobus and Mandy Shedden