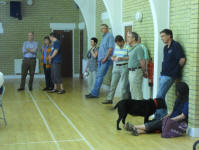 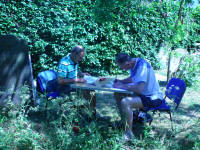 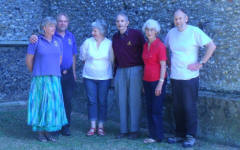 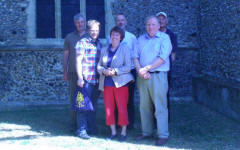 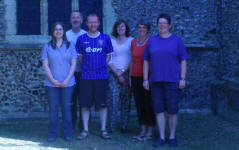 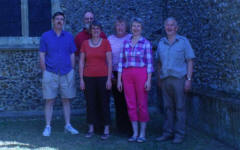 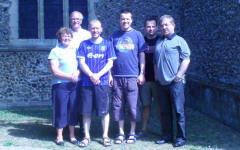 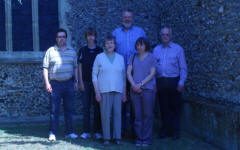 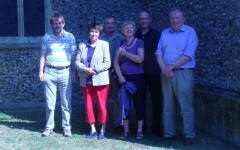 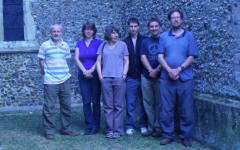 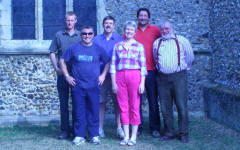 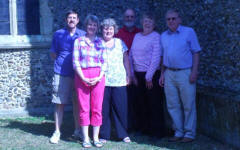 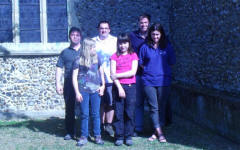 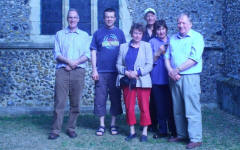 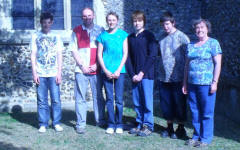 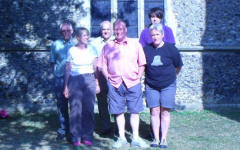 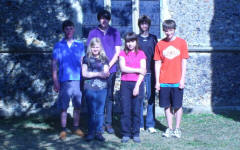 I have to start my report on Saturday's competitions with an apology to Richy, Why on earth I referred to him as Ricky in my introduction I have no idea!

What a glorious afternoon we were in for, superb weather with wall to wall sunshine and a nice breeze to refresh us as we listened from various points around the Churchyard. Our judges Brian Meads, master of the Essex Assn and David Rothera, ringing master from Chelmsford Cathedral were settled in the shade just out of the sound shadow created by the chancel.

It is nearly 40 years since I worked on Nayland bells and got my first grab, so those people asking me what they were like all got the same response, I just could not remember. Listening to the judges having a quick ring confirmed that the fourth hung above the other bells and shouted out a little but for what was obviously a mixed ring they sounded pleasant and to my mind rang a little faster than their 15cwt suggested.

With 14 teams entering the draw and a scratch band of young ringers entering on the fly it meant that the rules had to be changed reducing method ringing to a 120 and call change to 4 minutes. Much to my embarrassment I failed to include our entry from the Norman Tower into the draw, so I got comeuppance by finally drawing 14th place, actually not a bad thing from my point of view as it enabled me to keep a presence around the churchyard and hall.

All teams marshalled themselves in good time ready to be taken into the tower by Alex Tatlow or Robert Beavis, who timed the two minute practice and in the case of call change ringers their set piece. After ringing it was out into the sunshine for a photo line up by Derek Rose adding nice touch to proceedings.

Just to make it a little trickier we ran both the call change comp. with the method comp.Seven teams ringing method and seven plus the young bloods ringing call changes. I cannot pretend to have listened critically to all bands but my overall impression was of generally good ringing to a standard that would not disgrace any band and I think special mention should be made of the Nayland band ringing first so as to enable them to get over to the hall and prepare tea, and to the Gt. Barton band coming along for a fun day.

Because of a 6 o'clock deadline we had to move swiftly on giving our judges barely half an hour to report on the ringing and give the results, firstly for the Lester Brett Trophy then the Mitson Shield. The call change ringers all fell in a very tight group from 52 down to 42 faults with two teams standing out above this, Debenham A team on 30.5 and the worthy winners St Mary‑le‑Tower on 26 faults.

I failed miserably to get the marks for the Mitson but again the winning team in my mind was well ahead of our Norman tower team who were hamstrung by my method mistake costing us about 6 faults. Sorry but my mind was on other things. Interestingly we were criticised for our speed of ringing which I felt was right for the bells but which showed up the apparent slow struck 4th. The only other team to be criticised in this manner was Richy's team and what David referred to as a tenor turning at odds to the rest of the band. See RM's and past RM's are human. The final result SMLT A team with a good victory.

A 6 O'clock draw for the Rose Trophy at Stoke by Nayland proved a little optimistic but with the bells up and ready we were able to send David and Brian up to familiarise themselves with the bells and their little quirks, whilst we got on with the draw.

The South East District asked to ring first whilst SMLT were drawn second with the NE next and my team the NW last again. David and Brian removed to the sports field to the north of the church whilst the SE band began the long climb. Other ringers congregated along the church wall admiring the well kept garden whilst the 2 minute trial piece was rung. Then the test piece, Grandsire Triples being a wise choice for a ring with a slightly sluggish tenor and slow struck hand strokes on the 6th and 7th as well as trebles that would, given a chance, tend to run away. Whatever problems there were they were not evident in the test piece, some truly creditable ringing that would take some beating.

Next up were Ipswich with a good touch like all teams of Grandsire, but to the listening throng below without the meter of the SE band. The same of the NE band and our own final effort where we had difficulty in our trail of hitting the right pace or getting steady rounds. A pep talk by Winston and a long run of rounds and we were in to our touch, Some sluggish hand stroke leads and smaller bells dropping over big bells marred our effort which was good none the less.

We assembled in the nave for the results, and again Brian and David shared their comments with us, suggesting that a touch of major would have livened things up for them but after all it was a striking competition and not a method exercise. The final result was not in doubt with the SE District due winners.

Open ringing then continued to 8.30 before a well earned pint and chat.

My thanks to all who helped make it a great day out, and to our worthy judges. Job well done Richy, next the Ridgman 10 bell trophy at SMLT on 18th June, please come and support the Guild team up against the best in East Anglia and a bit beyond.

Rose Trophy at Stoke by Nayland