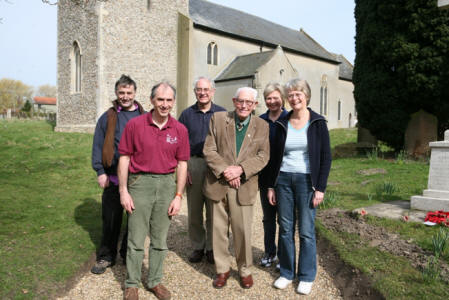 Following the re-dedication on Sunday 15th March by Bishop Nigel of St Edmundsbury and Ipswich of the newly restored bells of Chediston, a commemorative peal was successfully rung on the morning of Monday 16th March. This was the first peal to have been rung on these bells since 1977, a gap of nearly 32 years during which the bells were declared unringable.

Among the band were celebrated peal ringer, 92 year old Harold Rogers, who learned to ring at Chediston 80 years ago, his son Christopher Rogers and his daughter Patricia Hitchins, together with Chediston ringers Veronica Downing and Graham Downing, who scored his first peal at his first attempt. The peal was conducted by David Salter.

The peal of 5040 changes of Cambridge Surprise minor was the first of a surprise method known to have been rung on the bells and of course the first since their restoration and rehanging in a new frame by Nicholsons of Bridport.