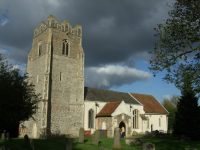 Cretingham’s first, and at that time only bell was cast in 1416 by Richard Baxter of Norwich. Two heavier bells were added between 1420 and 1513 having been cast by the Brasyer foundry also in Norwich. Two lighter bells were added in 1661 these were cast in the Ipswich foundry of John Darbie. The tower, believed to have been built between 1450 and 1490, housed this ring of five bells.

In 1911, Alfred Bowell, whose foundry was in Duke Street, Ipswich, carried out a comprehensive restoration. The bell frame and bells were removed, leaving just one truss which remains on the east wall presumably for heritage reasons. The bell fittings were replaced, the bells retuned and a new steel bell frame was manufactured to accommodate six bells, just in case! Bowell’s designs had weaknesses particularly in the headstocks also they had plain bearings which required regular lubrication.

Ranald Clouston (Suffolk Guild Bells Technical Advisor at the time) produced reports on the bells in 1959 and 1961. In 1977 he warned that the tower was badly cracked and that the bells should not be rung ‘full circle’ until a structural survey was done. Ringing was stopped but repairs followed. The cracks were filled, a reinforced concrete ring beam was inserted round the tower at roof level, the roof was re-clad and the bell frame fixed down securely. Five bells rang out again.

In 2015 The Friends of St Peter’s set themselves the task of having a new treble bell cast, to commemorate the Centenary of the end of the Great War and hence The Peace, to fill the remaining space in the frame and give a ring of 6 bells at last.

A kind donation by Jimmy and Sam Edwards of two Trinity Lighthouse bells, to be melted down, offset a significant part of the cost. A particularly successful event (netting around £6000) was made possible by Alec Greenwell and Ed Cooper who gave an illustrated lecture in October 2015 in the theatre at Framlingham College, describing their thrilling “Artic Adventure”. Smaller fundraising events completed the funds to cast the bell.

The new bell was “poured” at the John Taylor foundry in Loughborough on June 15th 2017, witnessed by several villagers.

It was decided that refurbishing and updating the fittings of the other 5 bells would make sense at this time, thus future proofing the whole ring of 6 bells as far as possible. For this part of the work some further £33,000 pounds would be needed.

However qualified members the Suffolk Guild of Ringers volunteered to do all the “Church Work” (taking apart, lowering the bells and completely reinstalling them, this included loading and unloading them for the foundry trips).

Our own village volunteers drove the bells to the foundry and have taken part in various smaller jobs to assist the whole process. This produced a large reduction in the total cost and we are very grateful to all those who helped.

Further fund-raising events were supported by the village as a whole and the wider community. These included a Bell Weekend with 2 whole days of activities, a Golf Day and a Quiz Night. Grants were received from the Heritage Lottery Fund, The Suffolk Guild, The Barron Bell Trust and our own Townlands Trust. We also had very generous individual donations. The East Anglian Daily Times publicised the project on more than one occasion. Thank you so much to everyone.

After much deliberation it was decided to retain the musical characteristics of the old ring so the “Peace Bell” was tuned to harmonise as well as possible with the existing bells, making a “7 cwt 6 in A”, thus preserving their unique identity.

An acknowledgement to present day technology was the inclusion of web cams in the belfry with a switching system, this allows the bells to be watched on a monitor at ground level. It has been very beneficial in the teaching process whilst satisfying criteria laid down by the Heritage Lottery Fund.

100 years to the day after the end of the Great War on Sunday 11th of November 2018 the “Peace Bell” was dedicated by The Right Reverend Dr Mike Harrison, Bishop of Dunwich, within a full Remembrance Day service. The service was followed by the ringing of all the bells to celebrate “The Peace”. A wine and finger buffet reception was held immediately afterwards to thank all those who had taken part in the whole project in so many different ways.

Many thanks to John Taylor of the Suffolk Guild for the historical input that he provided in 2015 and to James Walker for his photographic contributions.