On Easter Morning 2018 the eight bells of St Margaret's Church, Ipswich rang out across Christchurch Park and the town for the first time in almost a year, after a major restoration project which included replacing three bells to match the five tonally superior seventeenth-century bells.

Austin Canons built the church in about 1300 to meet the growth in the local population that it served, although their Priory church on the site of what is now Christchurch Mansion was built in about 1133. The west tower was first built using flint with some limestone dressings in about 1400. In 1871 the top of the tower was rebuilt in a grander style than before and raised by 11ft. The tower now stands 87ft high.

The first mention of bells at St Margaret's is in 1553 when four were noted in a return. In 1630 Miles Graye l of Colchester cast a new peal of five bells and in 1655 Miles Graye III cast a further treble bell to complete a ring of six. It is however possible that this treble bad been cast earlier by Miles Graye I and was recast by Miles Graye Ill. The tenor is the only listed bell of the peal with an inscription:

The living to the church, the dead into the grave. That’s my onely calling and propertie I have.

In 1899 a further two bells were cast by Mears and Stainbank. Of Whitechapel, and all eight bells were then rehung higher in the newly raised tower by Alfred Bowell, Founder, of Ipswich. The frame was principally of oak. with the pit ends and dividers being made of cast iron. All the bells were placed so that they swung in the same direction (east-west). This loaded the tower unevenly, causing it to sway when the bells were rung. In order to provide a reasonable rope circle for the ringers, the ropes for all but the sixth bell were also very severely drawn away from the vertical, making ringing more difficult. In 1925 Bowell recast the treble and the fourth.

In 1956 cracks were found in the tower, which led to the bells being rehung in 1958 by Mears & Stainbank of Whitechapel with mainly new fittings. They also tuned the bells. Further work was done to strengthen the tower but in 2005 it was suggested that a major project to lower the bells, rehang them and build a new ringing gallery in the church was necessary. The five seventeenth-century bells were better tonally than the more modem bells, with the treble being significantly sharp relative to the rest of the ring; many had harmonics which were both flat and sharp within the range for each bell. It was therefore decided that the treble, second and fourth would be replaced by new bells. All eight bells would then be retuned and rehung in a new frame placed lower in the tower. In July 2015 the church began a bid to the Heritage Lottery Fund, which culminated by the end of 2016 in a grant to cover a substantial part of the cost. Together with a £12k grant from the Suffolk Guild and various donations, the work could go ahead. The 2017 work started to lower the bells. This was carried out by Nicholson's Engineering with help from the builders associated with the project and a band of volunteers led by Tower Captain John Girt. 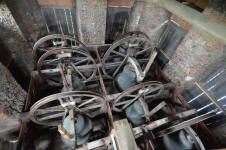 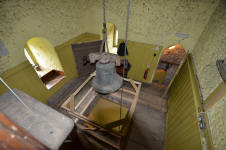 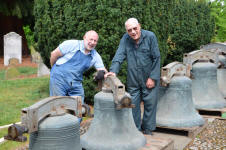 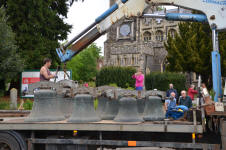 One author (DE) volunteered to take a historical photographic record of the work - his first introduction to the art of bell maintenance, never having even rung. With some trepidation about whether the tenor would fit through the hatch and framework. the project began. It was interesting to see how easily the bells were manoeuvred, using two winches played off against each other, and thankfully the tenor appeared in the body of the church, landing safely on a pallet ready to be moved. However, always make sure the pallet is the right way round so that you can get the forklift trolley under it! Several strong men and lengths of wood used as levers ensured all -.vas fine. The next day a visit from the local schoolchildren, who are learning to ring, was made before the bells were loaded onto the lorry for their trip to Bridport. A little while later the three new bells, matching the profile of the seventeenth century bells of the Graye foundry, were cast at the Royal Eijsbouts Foundry in the Netherlands and returned to Nicholson's. A trip to Nicholson's was arranged to see the new bells and the work being carried out on the old bells. It was interesting to see the various steps being undertaken to make the new wheels, from the general planning through to the steaming of the wood to make their sole plates.

In the meantime, a great deal of work had been carried out constructing a new ringing gallery within the church. This consists of an oak beam floor with clear glass balustrade at the base of the west window, so the ringers can now be heard and seen by members of the congregation. Given that the gallery has been constructed in the same place as a musicians' gallery once stood, which was removed "in consequence of the irreverent conduct of the individuals who occupied it". We hope that the ringers will not suffer the same fate! Beneath this is a new heritage area and in one corner is a TV monitor showing the bells as they ring - a view never seen by non-ringers and only occasionally by the professionals. In addition, a sub-frame was installed lower in the tower, and after a suitable curing time the frame for the bells was added to the structure. Being lower in the tower, there was less space 10 work in, and the bells are now much closer together and swing in different directions to equalise the stress loading. 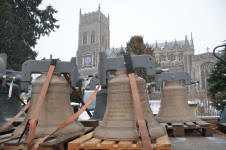 In March 2018 - as 'the Beast from the East' hit England - the lorry returned to Ipswich, delivering the bells to the back of the nave. The next day was taken up with major preparation work, including fitting the new bearings to the headstocks (an enjoyable greasy time being had by al l involved) and separating the wheels into halves so they would go up the tower. 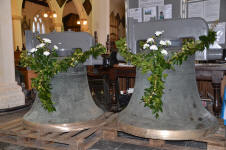 The bells were garlanded as is the custom and the church was open on the Saturday. when many from the town came to see what was happening. The bells were blessed during the Sunday morning service and afterwards the garlands were removed and placed on the graves of earlier ringers. 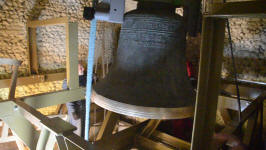 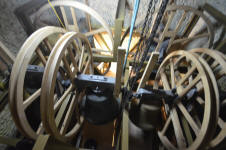 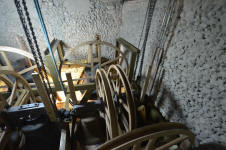 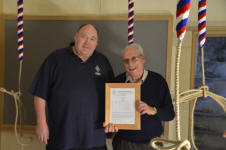 Then began the reverse process, starting with the tenor. The art of double-stacking bells on separate hoists was required to get the treble and second. into the chamber, high enough to enable the hatch to be closed and the frame completed before they were lowered into position. The next day everything was secured in place ready for the final commissioning of the bells.

The clappers were added to the bells. Each had to be placed precisely to ensure its flight was correct. The request ·'one flat'' was soon recognised as a request to tum the adjuster by a small amount to the next flat face, rather than a comment that the bells were tuned in F major. Sliders were adjusted; even David Evans was called upon to remove a small slice from the end of one, testing his carpentry skills.

Word soon spread amongst the ringers of Suffolk that the bells would be ready for a test on the Friday afternoon, and many turned up to hear and try them. All felt that the work had been worthwhile and that the bells were well tuned - a tribute to the founders of the seventeenth and twenty-first centuries and the tuning and hanging carried out by Nicholson's.

Two further innovations were introduced. The team have placed photoelectric cells on all the bells which enable "silent ringing", with no sound emanating from the tower to disturb the neighbours. This helps as a number of new ringers, especially children, are being encouraged to learn.

Secondly the clock, dated 1778, has been modified to be automatically adjusted and self-winding, saving the twice weekly climb of the tower to wind it by hand. As part of this, the clock hammer is now removed electronically with a switch and a big red or green light in the ringing chamber shows whether the bells can be rung safely. The photographic recording of the whole work on the tower has already proved valuable. For instance, the new frame sits next to the Sanctus window from the old chamber into the nave. As we needed to know just where and how big the hole was at a later date, photographic evidence was welcomed, especially by those involved who didn't want to climb the tower!

Finally, at the end of April a grand celebration took place with the Bishop of St Edmundsbury and Ipswich attending a service, blessing the bells and proclaiming, "Let the bells ring out!" This they did, with a host of ringers from Suffolk and beyond taking turns to experience the joy of the new ring at St Margaret's.

The band of ringers would like to thank the vicar, the Revd Canon David Cutts, and St Margaret's PCC and project team for their support; the HLF and Suffolk Guild of Ringers for their grants towards the work; those who made personal donations; and especially those who willingly volunteered to help the work be carried out: John Potter, Roger Coley, John Girt and Brian Rooke, with assistance from Shaun and George of R&J Hogg. Builders.

Further information and videos can be found at
https://www.stmargaretsipswich.org.uk/heritage/restoration-of-church-bells/

The bells following the 2018 retuning and recasting work are shown in the table below.