Another exciting project has been the one to restore the historic eight at Helmingham and although I haven’t been able to get any exact details yet, the dedication there is to be on the morning of Saturday 15th October”.  So wrote Richy in his Blog, so here is a bit about them to encourage you to come to the Dedication Service.  It will be at 11am and conducted by the Very Rev. Frances Ward, Dean of the Cathedral followed by refreshments and open ringing.

On yet another bell restoration occasion the sad news is of the death of one of the team during the project so that he was unable to take part in the dedication of the work with which he was so closely involved.  This time it was Walter Cutting, prime mover of the project and a local farmer.  He had worked tirelessly over the years helping to raise considerable amounts of money to keep this lovely church in a good state of repair.  Restoration to the Tower Parapet was undertaken in 2007 at a cost of £170,000 aided by a grant of £120,000 from English Heritage. 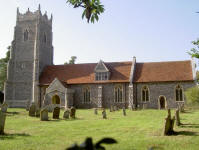 The bells were an 8, Dove records the tenor weight as 19-2-14 and in E Flat.  All were cast by Thomas Mears 2 in the Whitechapel Bell Foundry in 1815 to commemorate victory at the Battle of Waterloo.  They were in an oak frame on two levels.  In 2001 it was discovered that work was needed to the tower, Ranold Clouston reported that there was movement in the frame (later found to be around 5/16 inch) and ringing was stopped.  It can be seen from the picture that the tower is a fine Perpendicular example built from 1488 onwards and finished in 1510.  The parapet was added in 1543 and the date is on it.

The project proceeded with enthusiasm and hard work by many people including from the Guild and the blessing and assistance of Lord Tollemache in deciding the new configuration,  raising funds and helping with the removal and restoration.  The usual national organisations such as English Heritage had an input.  The main sponsor was the Heritage Lottery Fund and the heritage project was about French Revolutionary and Napoleonic Wars culminating in victory at the Battle of Waterloo and the involvement of Helmingham people during these years.  Sadly, a further £17,000 needs to be raised to complete the fundraising.

The bells were returned to the Whitechapel Bell Foundry for retuning while the old frame with some substantial beams was cut from the tower.  They are now back in a new cast iron frame on a galvanised UB steel grillage ‘shoehorned’ skilfully into the original position, this time on one level.  They are all in canon retaining headstocks and with new fittings.  The ropes are guided through the clock room (no clock) by horizontal rope guides and into the original ringing gallery.

Helmingham now have a fine ring of 8 all by the same founder with a Tenor weight of 17cwt-3-16 in the key of D and on 14th September we carried out a test ring.  Of course I dare not be too excited because they have yet to be approved by others but the consensus by the ringers on that day was that they are going to be up with the best in Suffolk.