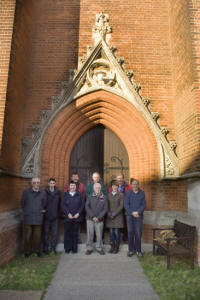 Frank Bloomfield, who started ringing at the age of 14, has decided to retire from ringing on his 84 birthday in January 2012 after 70 years ringing.

Frank learnt to ring while a choir boy at Hadleigh and started when the wartime ban on ringing was lifted. He expanded his ringing horizons when he moved around the country as dictated by his work. When his work took him abroad Frank made a point of attending practice and service ringing during his breaks at home in England . He rang at Henbury in Bristol, Burton – upon- Stather, Wellingore in the early 1990’s, and Navenby in the mid and late 1990’s.

Frank relinquished the post of Tower Captain to Brian Aldous in 2010 and retires with an unknown number of quarters and over 400 peals to his name, 52 listed in the current Suffolk Guild of Ringers Handbook.

Current Tower Captain at St. Johns , Brian Aldous and Stephen Pettman arranged a band to ring a peal in celebration of Frank's long career and interest in ringing. The peal was rung at St. John the Baptist Church , Orwell Road Felixstowe on Franks birthday January 27th 2012 in 2h45.