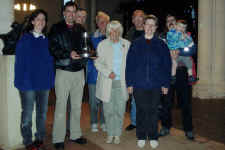 In 1984 the "Rose Trophy" was presented to the Suffolk Guild by Anita and Maurice Rose to be awarded to the winners of this competition. St Mary le Tower have won the trophy seventeen times since, but did not enter a band this year. The South East District has won twice, St Margaret's Ipswich and Grundisburgh once each. Only in 2005 did the trophy leave the South East District when it was awarded to the North West District.

This year's competition was held at Orford on 20th May and judged by Fred and Mary Bone from Essex. The winners were the North East District who rang Grandsire Triples. The winning band was:

The other bands were: