The District’s annual “cup final” on Saturday 12th May was organised by Ringing Master Trevor Hughes and took place on the easy-going but occasionally odd-struck six at Saxmundham.

Aldeburgh was the first of six teams to ring, and their confident start set the standard for the evening.  Sweffling, one of the favourites, followed, and seemed to have that extra concentration to continue good ringing throughout the 120 test piece.  Halesworth ‘1’ rang steadily, but too slowly to emerge as a serious contender, while Reydon was the only team to ring call changes as opposed to Doubles.  Southwold excelled themselves with some sparkling Bob Doubles, and Halesworth ‘A’ finished the set in fine style: rumour was that they had been practising after the ignominy of 5th place in 2006!

The judges were Adrian Edwards from Redenhall and Jo Beevor from Stowmarket.  After some positive comments from Adrian on the high standard of ringing, Jo gave the results: 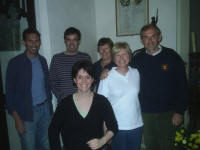 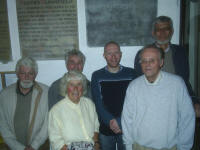 The Pat Bailey Trophy was presented to Maggie Wolverson, tower captain at Halesworth, and the Harry Archer Trophy, for the second placed team, to Helen Price of Southwold.  Peter Doy collected the Call Change Trophy on behalf of Reydon.

While it would have been pleasing to have another couple of entries, the high standard of ringing was a tribute to the progress of the District over the last year: Aldeburgh can consider themselves most unfortunate to finish 5th when the same performance would probably have won them a top three finish in 2006.