If you have ever been involved in a mass pillow fight, landed a dishcloth on someone else's face from another room, heard Louis Suggett belch or seen Alan McBurnie in his underpants, then you'll have some idea of the kind of week we had when ten members of the Suffolk Guild went to Lundy Island in the middle of July

Although the ferry didn't leave for the island until the Tuesday morning, everybody made their way to various accommodation in Ilfracombe - where the ferry was leaving from - and Barnstable on the Monday so to avoid an early journey down. This enabled people to do their own thing from exploring the harbour to getting a Wimpy. The ferry journey looked much like the inside of the toilets on a bad night out for the writer, but was fine for everybody else in the party who enjoyed the company of 'Ralph'. Not his real name - ask the others!

Having arrived in sunshine, the week looked promising and we went straight to the only pub on the island, The Marisco Tavern, led by the Ringing Master.

For those who have never been to Lundy, here's a context. The island is just three miles long and half a mile wide and has one pub, one shop and the church in amongst accomodation for tourists and residents. In terms of ringing the ten bells there, so long as you only ring between 9 in the morning and 6 at night, you are free to ring when you like, leading to an incredibily relaxed atmosphere that frequently lead to conversations along the lines of; "Shall we ring a quarter then?" "Might as well."

Thus, just three hours after landing we had rung our first quarter, Grandsire Caters, arranged entirely over a couple of pints just beforehand. It set the tone for firsts too, with Louis not only ringing his first on ten, but calling it too! Our stuff now at our property at The Barn and beds claimed, we settled in at the Tavern for the evening. With the hardcore still in the pub til late, the thoughtful retreated to get porridge for the morning - something the hardcore appreciated in the morning.

Sore heads, both from alcohol and excessive pillow fight in the 'adults' room upstairs, greeted the breakfasters, but nontheless, eight of us were ready for the first peal of the week. Plain Bob Major was duly scored and the band joined Chris and Alan back in the pub and contemplated our next move. Walking was decided by most - although not to universal approval - and in various different groups we went to see the North Light. However, the curry house was closed - again, ask about this one, not enough space here!

Exhausted and some scarred by catching Mr McB in his underwear - although I was lucky, some were apparently scarily close to seeing him in less later in the week - we again placed our orders at the bar and the good food consumed.

It was at this point we realised two thirds of the top table, two district ringing masters, the webmaster and the report editor were present, so an impromptu, slightly tipsy meeting was undertaken. Although more fun than a Guild Management Commitee Meeting, no one could read the secretaries minutes.

Day four in the Big Brother house and - oops, sorry, wrong report. Our day four started with a second peal, this time Superlative Major, this time rung for the Lundy Island Society, a worthy cause. More walking followed and thankfully Alan wore more clothes - you probably know that more food and drink followed. This time though, we retired slightly earlier to the Barn, where James Smith got his handbells out (steady ladies!) and some choppy but very respectable ringing was achieved in the circumstances. Unfortunately, Louis, James and Ruthie fell just 71, 880 changes of Cambridge Minor short of their target due to the umpires falling asleep.

It was also the night that Alan lost his underwear, last seen flying low over Ruthies head and landing near a group of people who were mysteriously unconcious seconds later. And to think he told Micky, "Nothing to report here darling..."

Unusually, our last full day on the island started with no ringing at all. Instead, Ruth, Kate and Mary went snorkelling - Mary enjoyed getting into her medium man, Chris didn't even notice. To save the secretary's dignity, it's not as it sounds - ask inside for details. They came back glowing with excitement, unpeturbed by the only rotten weather of the week.

The afternoon was an afternoon of achievement - two quarters with lots of firsts. Stedman Caters and Cambridge Major were scored and lots of people retired to the Tavern very happy. Over-full and over-beered (I know, I didn't think it was possible either), the handbells were out again, as were the pillows and bizarrely, the thistles. I think the Alan Files need to be sent in separately...

One more quarter attempt, this time of Bristol Major came to grief on the Saturday morning before we left, but this failed to dampen the spirits of a group who had enjoyed a very successful week. All in all, two peals and three quarters were scored, twenty-five ringing firsts were achieved, including Chris Garner's first blister and Chris Munnings found his wallet. 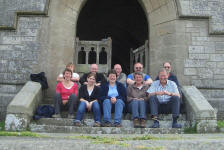