THIRTEEN TEAMS?! Unheard of! Even allowing for three towers, St Mary le Tower, Debenham and Pettistree putting in two teams each, this was a good entry, and evidence perhaps that bands had actually taken notice of the Ringing Master’s exhortation to join in. The organisation of the day was excellent, with special bell road signs directing the lost to Sweffling, a delightful village in the middle of the huge swathe of rurality between Saxmundham and Framlingham. The bells themselves are light and easy-going, which enabled all bands to rise to the occasion and ring well, but with enough odd-struckness to sort out the best from the rest.

A superb ringers’ tea in the best traditions of ringers’ teas was taken at Sweffling Hut, the village hall, provided by Suzanne Stevens, Denise Church, and many anonymous but talented members of Sweffling WI. It was great to see so many ringers there, and there was quite a “buzz” as a result. With most members well into the nth helping of cake, the Master introduced the judges, Fran Dodds and Andrew Ellis from Birmingham. Richy also took the opportunity to apologise to the Sweffling band who had failed to complete their test piece as a result of him (as official reserve) falling off the line in Grandsire Doubles – all those who regularly fall off the line in Grandsire Doubles should take heart!

Fran commented on each team’s performance: erratic leading, hurried handstrokes, dropped backstrokes, missed dodges, nervousness – every glitch had been noticed, but there was praise too for fine ringing, of which a good deal had been heard. Then Andrew gave the results: 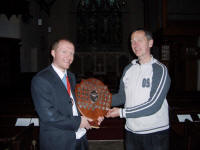 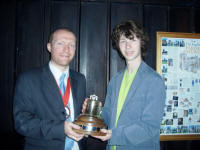 What a great achievement for Pettistree! Mike Whitby, receiving the Mitson Shield, made a comment that all bands seeking to improve should heed: “It’s taken us 20 years to win this;” he said, “You can do it too”. Debenham are the first and very worthy winners of the Call Change trophy: Not only did they put in two teams but they finished 5th and 8th overall, cause for celebration even without a trophy to go with it.

Evening – Rendham - the 8-bell competition for the Rose Trophy

This was a more modest affair in terms of teams entering, but the quality of ringing was very high. Again Fran commented on every nuance in the ringing, and Andrew pronounced judgement: 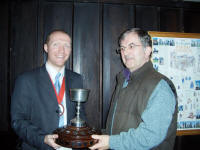 Once Richy had worked out how to present himself with the trophy, and he and Jonathan and Suzanne had been thanked for organising such a good day, we all repaired to The White Horse over the road, where the Victoria bitter incidentally is excellent. The vanquished took solace in their pints. “It’s not the winning, it’s the taking part that counts” someone said. “Is it heck – we want to WIN next year!” was my initial reaction. But we knew we weren’t going to win the 6-bell this year, half our ringers were away, we hadn’t really practised because Dominic was in Italy until the day before, and yet we still took part and still got something from it. So we’ll be back next year, and we still won’t win, but maybe we’ll move up the order a little, and maybe some new bands will compete for the first time, and who knows, it may take us less than Pettistree’s 20 years to become champions: we’ll try anyway! Do join in next year!